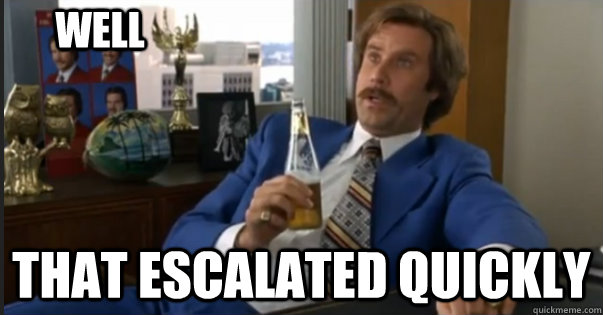 Whew boy, AOC 20222 difficulty sky rocketed this week! I was doing an okay job keeping up with the daily puzzles but the combination of getting busy at work, at home and the increase in puzzle complexity humbled me. Had a silly bug in my day 15 part one code that caused me to spin my wheels and wasn’t able to complete part 2 — that was the start of falling behind. I haven’t had the chance to get enough time to get any more stars since!

🤞 Hoping to get some time to catch up this week but we’ll see, I just need 2 stars to beat my progress last year (which is my original goal aside from using AoC as an excuse to finally learn Rust). The only silver lining here is that because of the spike in difficulty, I’m still in fourth place on my work’s private leaderboard so plenty of opportunity to make it up. Regardless, you can follow my progress here.

Anyways, on to the best things of the week.

This was pretty hard, I came across a ton of great video content this week. So here’s a few of my favorites:

On December 5, a team at LLNL’s National Ignition Facility (NIF) conducted the first controlled fusion experiment in history to reach this milestone, also known as scientific energy breakeven, meaning it produced more energy from fusion than the laser energy used to drive it. This historic, first-of-its kind achievement will provide unprecedented capability to support NNSA’s Stockpile Stewardship Program and will provide invaluable insights into the prospects of clean fusion energy, which would be a game-changer for efforts to achieve President Biden’s goal of a net-zero carbon economy.

Fusion! Amazing — about time! I feel like my whole life I’ve been promised this coming fusion future, it is starting to feel real. Was good to get context for the fusion announcement this week — still a very exciting development.

What’s better than one announcement video on fustion? Two. More great content on another rapidly developing approach to fusion technology from one of my favorite channels, Real Engineering.

Black hole stars may have been the largest stars to ever exist. They burned brighter than galaxies and were Larger than any star today or that could ever exist in the future. But besides their scale, what makes them special and weird is that deep inside, they were occupied by a cosmic parasite, an endlessly hungry black hole. How is that even possible?

I’d never heard of these but the scale of the numbers involved here are truly humbling. Can always count on Kurzgesagt to expand my universe…

After two years in development, SvelteKit has finally reached 1.0. As of today, it’s the recommended way to build Svelte apps of all shapes and sizes.

Big milestone from svelte team - congrats! Not I will need to find time to upgrade this site to use the stable version.

Best thing I listened to:

‘Tis the season! A lot of great interpretations of classics and less traditional holiday tunes.

Photo by Christian Grab on Unsplash